So I have realized that I haven’t been as efficient on getting the results of the chromosomal test out to you all…after a few friends anxious to start their knitting projects or hit the sale racks for the sweet little baby that is now the size of a banana asking, I realize I left some people hanging who want to know now!  I’m blessed by those who have been waiting to find out how to help us resupply the baby necessities we got rid after being done!

I of course got the call after Richard left for a busy week in Anchorage for work.  I knew that he would be gone when we got the results and in some ways was ok with it, because if it was news he wasn’t going to be too thrilled about then I wouldn’t be so heartbroken by seeing his reaction.
When I received the call, I immediately texted him and told him the results were in…I wasn’t sure if he wanted to hear it for himself or if a text would suffice.  Well, being ever impatient to know if there would be another little buddy to take on hunting trips I was told to hand over the info ASAP.

I was hesitant, I have felt the pressure ever since we first told Cayden and without him spending time processing the news of a new sibling turned to me with a stern serious face and said “that better be a boy in there”.  I have watched him suffer through his sisters’ never ending supplies of babies and princess dresses take over every inch of our home.  I have watched Richard’s frustration level rise when the girls are in shambles because he can’t for some reason understand why the current state of their being calls for an “end of the world” reaction.

To say that daddy’s reaction to the news wasn’t unexpected, let alone his little mini me, would be a lie.  They both reacted the way I had expected, but had hoped would find the will power to not show the “sensitive” pregnant lady.

Cayden’s tears and pure heartbreak was soon smeared all over daddy’s shirt after we decided to share with the kids the news once daddy was home.  I soon realized that his reaction was the very way his daddy had wished he could have gotten away with.

I felt the need to tell Cayden what was on my heart after I allowed him to grieve all the dreams of having a buddy to go and run away from the house that oozes with pink, barbies, and a constant unstable emotional environment.  I told him that God must think he is pretty tough guy, since it will be a lot of work to look after 3 little ladies.  He gave me a snarling look and asked what he would have to do.  I told him that there will be boys who want to date them, there will be mean people who will pick on them, and there will be times when they lack the right judgment when choosing friends.  As I saw the wheels turning, I saw the disappointment laced with anger soon fade.  Because let’s face it, Cayden is the kid who comes running when they are crying and he isn’t the root of the problem.  Cayden is the one who can raise his voice super high when trying to calm down number 20 out of 100 emotional meltdown.  Cayden is the child who will pack his Newsom bunny for Ezzy in her bag when she has a Seattle appointment. 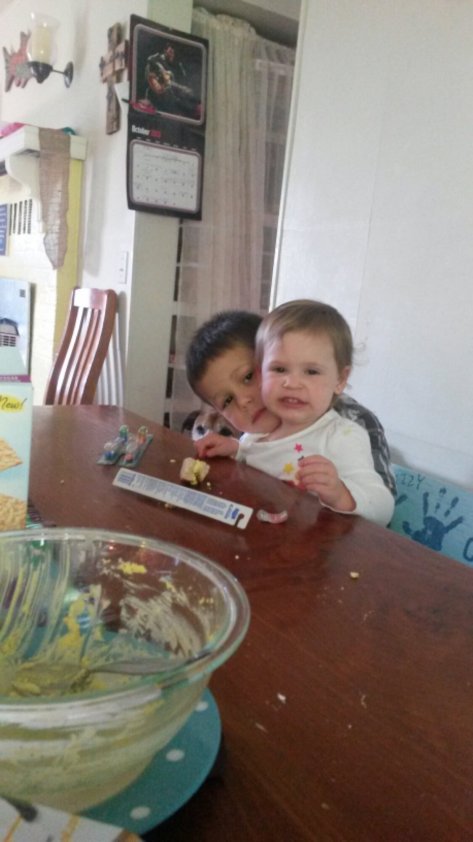 I decided to let the older Harney man decompress the news that he was going to have yet another girl to care for.  I knew that I could cross the line and try to be the conviction he needed, but thank God I was able to hold my tongue and let God speak to him.

A few days later we were watching one of our favorite shows, Modern Family.  The older daughter in a play of control decides to date a ridiculously older disgusting man to tick her dad off.  The mom tells him to not react, because the more he pushes the more the daughter will date the creep.  He finally reaches his maximum and decides to deliver this heartfelt speech to his wife before going and rescuing his daughter, little does he know his daughter is standing right behind him, tears in her eyes because she thought he didn’t care about the blatant horrible choices she was making.

I turned and saw my husband’s face and in that moment knew that God had done his work.  I looked at him, I myself overcome with the emotions that wrap around my very hard teenage years spent searching for unconditional love and acceptance from men.  I told him, “honey to you see the amazing calling God has placed on your life?”  “do you see that he really trusts you to be their leader, their head of their home until the day you walk them down the isle?”.  I told him how he has to be their knight, their love of their lives until they decide to replace him with the man they are going to marry.  I told him it is going to be a difficult road, but if he does it right; he will have 3 beautiful, strong, secure girls who approach womanhood with self-confidence and self-worth, which will stop them from making mistakes their momma made.

So as we are gearing up for yet another Harney girl, I am feeling immensely blessed.  Blessed that I have another little girl to experience the unconditional love that my Harney men give without strings attached.  Blessed that my girls will grow up knowing they don’t need to compromise themselves to feel loved and accepted because their daddy and brother will fill those shoes until they meet the men we have prayed for them.  Blessed because with this little girl coming along I can’t help but realize that even though I spent many painful years searching for the LOVE I didn’t get, God in his wonderful sent me a man who has given me more love then I deserve.

I can’t help but see God honoring Richard, knowing that he understands his important role to teach Cayden what sacrificial love is and to model it to his girls.

And because I can’t sing his praises enough already he came up with the idea to ask my mom to name our sweet baby girl.  He said with all the support she gives us that we should honor her, honor all that she is to us. So if you ask us what her name is we will have to say, “um, ask my mom”.  We can’t wait to find out what name she is praying about and dreaming about as we watch my belly grow and realize that I’m over half way there before holding our 3rd Harney girl!