We just got back from the old house…

The silly silly silly woman inside of me found myself shedding some tears as Richard and I picked up the remaining few items left in the house that sheltered our little big family for the last 6 yrs.

I looked out through the living-room windows, watched the trees sway, the late summer night sky begin to tuck itself into bed and breathed in one of the last moments I would find myself ever doing within those four walls.

6 yrs is a blip for few, 6 yrs is an eternity for some, 6 yrs seems like forever wrapped in seconds for the Harney family.

When we first found ourselves in the tiny little 950 sq foot home, we felt like the storehouse had been opened and poured out onto our family.  The news that a new little soul would be coming our way made the thought of bringing a baby home in a tiny 2 bedroom apartment with an almost 2 yr old, 2 big dogs and a cat sound impossible.  The house was happen chance to most who heard how we found it, especially when the cost of rent was mentioned, but to us it was God’s providence.

The tiny home that held the Harney family saw 3 little souls be brought home too.  1st birthdays, 1st day of school and many other precious memories flooded our hearts as we said goodbye tonight.

I held richard in my arms, allowed the salty warm tears wet his black shirt as we remembered bringing fragile tiny Ezzy home from children’s Hospital for the first time, watching Cayden stay up with the video monitor, until 11 pm reading books at 21 months old, experiencing Kyre self potty training at 2 yrs old and Ya’el running through the home at 10 months old.

All those life moments, the ones that can consume your existence and leave you feeling like sleep never happens, yet seem like time has stood still occurred in that house.

Tonight I sit at our kitchen table after an insanely busy week of picking up the pieces a family of 6 leave and finding new ground to imprint into while trying to keep a heavenly perspective has left this wife and momma worn out.

We witnessed three different representations of the body of Christ tenderly and joyfully serve as our family uprooted to our new destination.  Our expectations were met and doubled by God’s mighty provision.  There were grandparents, parents, teenagers, children, girlfriends and friends hauling boxes up and down stairs.  Thoughtful hearts scrubbed the bathrooms and pulled up the staples left over from carpet that had been drug out, all done without the need of being asked.  A warm dinner was delivered just at the moment when Richard and I could have very well collapsed from lack of food and water.  No detail was unseen, Christ’s bride was shinning and doing what it does best…you know the best part?!? It wasn’t done for their glory, but for his.

This whole process has been ordained and cared for by the one we have asked to guard and guide our family’s steps.  Finding a home, fairly priced, without need for a construction zone has been impossible.  The two other homes we were in contract with were homes we had settled with, with an amount of unrest that would have later eaten us up.  Just when we had decided the search was over, this home fell into our laps.

We looked, we allowed our souls to yet again dream, we placed an offer, an agreement was made and soon we realized it just might happen.

After the inspection took place, the shiny peace that came in a package of hope soon became tainted.  It seemed that it would never happen.  Then God sent a contractor our way that wouldn’t stand in the way of God’s plan of being Jehovah Jireh to the Harneys.  The list of demands that needed to be meet were hammered out, figuratively and even when a final inspection that was moved up, God had every single step laid out.  Christ’s bride yet again was there being his hands and feet in the form of: heavy machinery, rock, doors, piping, tools and labor.

I woke the morning of my 31st birthday with a date set for 9:30 am and my famous signature needed for countless forms.

Without a doubt I knew what had to happen before we set a single foot inside the walls that we would call ours.  God told me, the house that would shelter our family for years to come had to be given over and dedicated to him.

After letting Richard know what God had impressed upon my heart, the plans were set in motion.

August 14, 2015 the STAC worship team, their precious families and leadership were asked to come for a night of worship.

We had stopped by the home once before and I left feeling turmoil, doubt, anxiousness and unrest.  Something had to be done before we would could call it ours.  God told us exactly what  to do to change that.

After songs were sung, welcoming the holy spirt, claiming God’s power, worshipping his name and surrendering to his sovereignty took place, the word of God echoed off the walls of the home that would be filled with our family’s lives.  1 Samuel 27, Psalm 91 and other verses were read.  The street was filled with the sweet sound of voices young and old offering up a sacrifice to our one true King.  Lives were changed, faith was inacted, forces were defeated.  As our family was surrounded, hands laid upon our shoulders and back, giggles from little souls muffled, it became apparent to be what God had done.  Peace, indescribably peace filled our hearts and has yet to uproot itself.

Why do I say this?

I say this because we now live in a home that is more then our hearts could ask for.  A home that will allow 4 busy kids to grow in, a home that is continually showing us that God was searching and better yet knowing and responding to the inner parts of our souls.

If there is anything you get from this, please know that God isn’t a genie or Santa or Dear Abby.  He doesn’t look at your amazon wish list and start knocking through the list.  He doesn’t hand things over just because you want them.

Our family has patiently waited and to be completely honest, struggled with his timing.  Yet I still remained content in the home we lived in for  6 yrs.  Keeping my eyes on my own paper as my pastor’s wife says.

Our pastor in Phoenix gave an amazing sermon one Sunday that has stuck with me since that very Sunday morning.  God will meet your NEEDS not your greeds.

Tonight after tucking our babies into their beds after a much needed date night, THANK YOU kendra and kevin, I am resting in the plan God was writing well before I knew we would need it.

Because 6 yrs ago I found myself standing in a 950  sq ft home overwhelmed by his provision to yet again find myself years later in a new home in awe of his providence.

We look forward to welcoming any of you into our home!

Just call, text, message or email, we are more then happy to share this new chapter with you all. 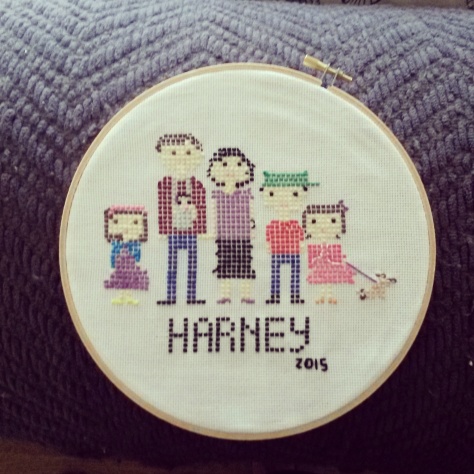