Anyone else struggling with the fact that CHRISTmas seemed like it was a holiday that couldn’t get here soon enough? Yeah, we felt that way until we were up late yet another CHRISTmas eve, wrapping presents until almost midnight while watching the Holiday. We always laugh and say, “didn’t we just watch this?!?” With December brings the hustle and bustle, Bing Crosby in the background, strangers greeting you with a smile and a Merry CHRISTmas (no happy holidays here, thanks to living in a strong Republican state) and small town events that keep you at times busier then you and your family need. I LOVE, LOVE, LOVE CHRISTmas, I mean really love it, so much so that my new husband banned CHRISTmas music until after thanksgiving when we first got married and quickly found out what all that pent up energy could do while waiting for the friday after turkey day…Santa puked in our house that year. Each year my love of the season began to break down the cold heart that was two sizes to small as he joined in the festivities. I couldn’t wait to bust out White Christmas, my candy cane advent calendar, or the treasured ornament we had began to buy for Cayden each year to one day send to him when he no longer came home for CHRISTmas. Then December 2009 took place…

I just overheard Richard tell Ezzy, “hey Ezzy…did you know what your mommy was doing at this time 5 years ago?!?” “She was getting ready to have you…”

Breathe in and out Sarah, In and out…

I have done a fantastic job of holding this season at an appropriate length if I do say so myself. I fought planning her birthday party, like I do every single freaking year, it’s a defense mechanisim, but I didn’t let a dark cloud follow me as the giant ticking clock reminded me that its one less year of her life. I would grieve here and there, then breathe in and out, and face the world. The world that has changed since my closest girlfriends all moved away this year. I never had to explain to them why December was hard, they understood, they hugged me, helped me refocus and sometimes gave me my much needed space.

Her dad either perceptive to my trauma that clings to me with a deathly grip was eating up my soul or the fact that I was being pulled every direction with my ministry role and policitan role, filled in the gaps and planned the most perfect FROZEN themed party for our two little holiday babies. Kyre and Ezzy had so much fun with the jammed back party he planned and walked away feeling like two little princesses.

Trying to relinquish the bitterness that wells up in my soul and tries to seep in the crevices that have been dry and began to heal has been something that I have been in conversation with God. The tug and pull that my spirit would feel as I have a memory that sends a twinge in my heart would send me running to him.

When the moments that would normally send me in a whining tyrant to my Abba Father came, I would literally just say one or two words directed at him and then felt my control begin to fade and a longing of being wrapped up in his loving arms take over. You see me and God, we are tight, NO joke. I don’t know if it is because of the life changing bible study group I have been apart of this year, the intentional time I spend in his word daily, the healing he is doing in my life, or my spirit’s hunger to have a heart that resembles his, whatever it is, I have found that the darkness and loneliness are just mere glimpses before I am rescued.

As you all know we entered this school year, holding our breaths, anxiously wondering what this fall and winter would bring to our family. We knew the day was coming, had lived in denial, but also prepared for the worst. How could we not? The support group we are in told us to be prepared for lengthy hospitalizations, nasty bugs that would make her lungs decline, teachers or staff that wouldn’t care for her in the right way, or worse a VERY sick child that would have to be pulled from school because her health would be so detrimental.

Each time I felt the well getting ready to spill over I sensed God tenderly speaking to me reminding me that HE is holding her tight.

1. no length hospitalization
2. no nasty bugs (she actually finally got rid of one she has had in her lungs since she was 1)
3. no indifferent teachers or staff
4. no withdrawl from school due to medical limitations

We have been blessed with one of the most amazing, attentive, caring teacher and aide. They love my Ezzy. They advocate for her and go a step beyond what I could ever had expected as they joined Team Ezzy. It seemed fitting to have her draw them “Team Ezzy” lungs for their CHRISTmas gifts.

Ezzy’s one gripe since CHRISTmas break is that she doesn’t get to go to school. She misses the independence, the life she is building, the relationships she is developing, and the moments she isn’t living in an environment that reminds her she is different. Ezzy received Student of the Month at her school for the month of November. I was informed that she received this honor because she is one of the most well liked students in her class, she is always offering to help and be a team player, and that she is such a joy to be around. Her teacher told me that all the children gravitate towards her, everyone wants to sit with her, play at her station, or have her attention. Yet she divides herself, being a friend to all.

That’s it my girl, shine that light, shine it bright.

In the quiet, in the stillness, I know God is there, waiting to answer my heart’s searching.

Ezzy is thriving in her new life. I talked with a mom from her class who told me she kept her child out of school almost the entire first month of school when they received the handout about a child with CF being in her daughter’s class, because her daughter was sick. The mom didn’t know me or Ezzy at the time. I have been stopped, emailed, called, etc. by people wondering how Ezzy is holding up at school. I can almost sense them brace and get ready to receive news that will require an empathetic response. Their surprise and relief is welcomed by my own heart as I digest the words, “She is doing amazing, thank God”. I was blessed to watch her dance in her ballet class, she is the smallest and youngest, yet I just read her review and her teacher said “is the sweetest girl, I enjoy having her in class”.

Watch out people, she is magnetic. I see it everyday. People at church will head straight for her, pat her head, try to get a word out of her, or just peek at her as she lives her life breaking the expectations her doctors have given. Children want to be her friend, strangers love her from afar and filled the tree with presents because they care for her and her story.

Sweet Ezrah May, 5 yrs old dreams of being a teacher one day, dancing as the sugar plum fairy in the Nutcracker and plans on going to college…away from us…yes, she reminds of us from time to time she isn’t living at home forever. Her determination is inspiring, if she wants to do, don’t stand in her way. Her heart is so big and she always sees your heart, not what is on the outside. In the past, her dreams caused the worst side of me to reign, but now I find myself sitting back, acknowledging and encouraging her dreams without seeing them shackeled with the chains of CF.

God is doing a work in me in many ways, but it all originates with a little tiny soul that came into the world on December 26 2009 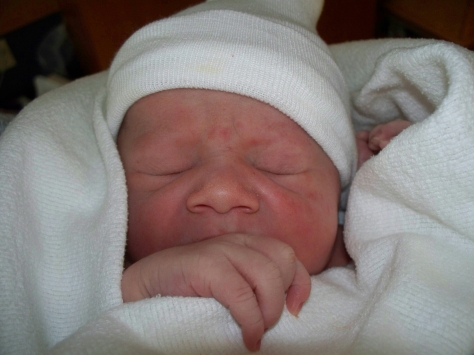