Easter has come and gone, admits all of the craziness with planning the worship for our church, providing hot lunch for Cayden’s school as a fundraiser, and having Cayden’s party all in one weekend, I have had some time to think about the mate God graciously gave me…

When I first started on worship 3 yrs ago, we only had Cayden. He was almost a year old, close to being weaned and becoming less and less attached me, well, to be quite honest the boob. As freeing as it felt, I also felt great sadness seeing my little baby, my first born pass me over for his cool and exciting dad. Seriously, cayden would stop what he was doing and coming running to do the door the minute he heard daddy come home! With this new found freedom I was able to start my first experience in ministry, as part of our church’s worship team.

After having Ezzy, and the trauma of her birth, sudden surgery, and heartbreaking diagnosis, I honestly believed my days were over on worship. Shortly after returning home from our brief stay in Seattle, I soon found out that the call to return to ministry was there and I was letting fears push it away. I was approached by my husband and was told that it was time to go back to worship. I immediately fought him on this, there was no way I was going back. You see I was in one of the biggest battles of my life, one that really shook the foundation I had, tested my faith, and quite frankly I felt like a fraud being up there, singing songs about hope and worst “trusting” God in his plans. After putting aside all of the doubt, I let the encouraging words my husband spoke and the still small voice tell me it was time. I soon found myself back on worship just a month after returning from our stint at Seattle Children’s.

To say being on worship with a “fragile” nursing baby and a two year old is a complete understatement. There were many Sunday mornings were stress levels escalated and the tempers and passionate souls that Richard and I have,got the very best of us. Then to add the lingering cold and flu season on top of that, it seemed like I was going to church by myself every other week, leaving my husband at home, away from fellowship and the word, so that we could protect tiny Ezzy and her immune system.

We seemed to finally find our rhythm around Ezzy’s 1st bday. Richard and the kids were going to a friend’s house each sunday morning during practice and it was close by our church, which saved me having to make the drive back into town to nurse and get everyone out the door in a few minutes to make it back in time for the service. A huge relief took place when Ezzy soon gave up the battle and broke down after weeks of fighting and drank milk NOT from mom.

Life with Ezzy definitely impacted and shaped how I participated in worship. It never failed the weeks I was consumed with fear and worry regarding her health, or more importantly the life expectancy that was always brought up at EVERY single doctor apt, every single month, was when I heard from God.

Where I was at spiritually soon was tested again with the huge surprise a new baby was on its way to the Harney family. Again soul searching was what drove me to find a deeper understanding to what God was entrusting our family to handle.

Through this all, I have been blessed to have a husband who has been the epitome of sacrificial love. Each Sunday, (I now have worship every sunday, as opposed to twice a week, like it was in the past) I watch my husband go into the trenches. I can say this because I live with these children 24/7, who can show a side of themselves I dread, faster then I have the chance to armor up and prepare for battle…seriously, I am NOT joking.

It wasn’t easy in the beginning, and many times words were said that shouldn’t have been said, mainly because someone felt like a martyr…admit it honey…you KNOW you did or because a control freak couldn’t let go. It took time for me to accept that when I came home from worship practice that the house was going to look like an atomic bomb went off, in every single nook and cranny. There were many sundays I was quite frankly embarrassed someone was going to notice that Richard didn’t adhere to some of the most basic fashion dos and don’ts while dressing the kids. But then there came a moment when I realized that I was really, to be honest, being a self absorbed brat!

Here was my husband, getting up earlier then he wanted to on Sunday, after me waking yet another baby while the rest of the house slept, so that I could get to practice. Here I was leaving and being a part of a public ministry while he sat in the back row every sunday, unnoticed or acknowledged for the sacrifice and time he was giving up so that his wife could sing each sunday.

I came home from practice Easter morning, nervous and anxious. I had prepared myself on the drive back in to town to chill out, to not nit pick if the bowls of half eaten oatmeal were still on the table and not in the sink soaking. To not make faces if it looked like my girls decided to try on every single piece of clothing. More importantly, to not critique my husband’s method of getting 3 children ready on his own, and accept we are always going to prioritize and do things differently.

To my surprise, there was my beautiful family, dressed and ready to go as soon as I pulled up in the driveway. Everyone was smiling, the girls were in there poofy dresses, tights and head bands on, and not in tears (which is a norm on sundays). My son was dressed in his suit, freshly pressed shirt, thanks to dad. Better yet, there was my husband smiling and asking me if I needed food or coffee. We were able to walk into church, get our free family picture taken, without exchanging hurtful words…something that has happened in the past due to stress, and best, without looking disheveled or worn out, but instead ready to celebrate our Savior! 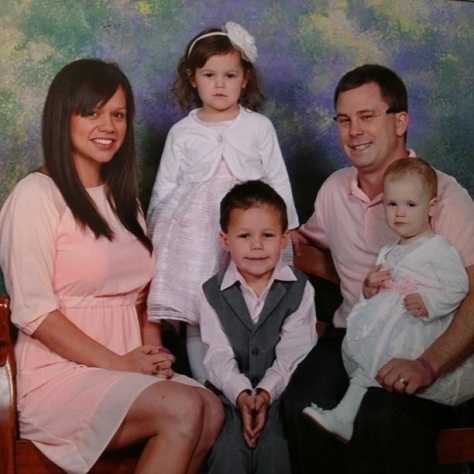 Just as I was getting prepared to talk to the congregation about sacrificial love, there was my husband modeling it, and the best part was that he wasn’t asking anything in return. I know that there is NO way I could be a worship leader if it wasn’t for the unconditional support I have been given from my husband. I know that I wouldn’t be able to have courage to briefly speak each sunday, share my heart, or learn to be a leader in ministry if I didn’t have a husband showing me what leadership under God looks like.

As I am getting ready to crawl into bed for yet another night away from my best friend while he is away on a work trip, I am thankful for the mate God has given me. Thankful to have a husband that models Ephesians 5 to me and our son and daughters. Tonight I am thankful that I have been given the opportunity to follow the plan God has for me, because I have been given a husband who has apparently grasped the TRUE meaning of sacrificial love quite sometime ago.